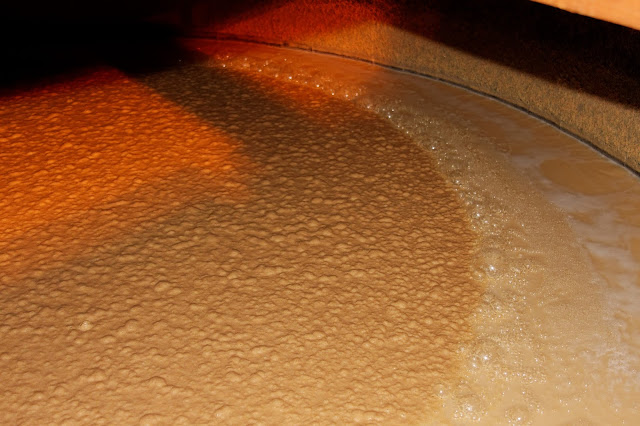 In a prior post I explained that all spirits start with some raw material (sugar, potatoes, grain, etc…) to which water and yeast are added and then allowed to ferment, causing sugars to be converted into other organic compounds. The end result is a big vat of “mash”, as you see above.

Besides the original source material (grapes, grains, etc.) the mash is now a witch’s brew of:

Ethanol is the “good” type of alcohol that we consume, hopefully with party hats on! Congeners are a mix of other alcohols, acids, fats, and so on. Congeners are what give a spirit its unique taste. Some congeners are pleasant tasting while others are nasty. Controlling which congeners end up in your bottle is the magic of spirit-making.
Distillation is the next stop of how this mash is turned into something you might want to drink. Distillation might sound complicated and wizard-like, and it certainly can be. But the basic concepts are very easy. Simply put, distillation is a way of concentrating the good parts of the fermented mash, and leaving behind the less desirable elements. Using heat to break apart the various elements of the mash, a distiller select just the desirable components. Of course, sloppy distillation can leave lots of the bad stuff, which makes hangover’s particularly nasty. That’s one reason why higher end spirits are less likely to cause you problems on the morning after than if you consumed the same amount of the cheaper spirit.
Back in the seventh grade I took one of the most influential classes of my school career. It was “Introduction to Physical Sciences” and was the first time my natural interest in science met up with experiments that boldly demonstrated the awesomeness of matching theory and practice. One experiment I vividly recall was when the teacher give us each a vial of colored fluid with gunk at the bottom, telling us that we were going to separate it into its component parts.  The gunk was easily removed by filtration, but what of the liquid? We knew it wasn’t just water. That’s where a process called fractional distillation comes into play.
If you were to take a pan of plain old water and place it on a hot stove with a thermometer in it,  you’d see the water raise in temperature to around 212 degrees F. with little observable physical change to the water. As it approached 212 F, the wisps of steam would start coming off – This is the water changing state from liquid to gas. Now let’s keep the water boiling for a good long time and watch the thermometer. No matter how high you turn up the heat, the water won’t get hotter than 212 F. Sure, turning up the heat makes the water turn into steam faster, but the liquid will stay at 212. This is an important factoid for later.
Now let’s start over. To our pan of room temperature water, let’s add some ethanol, the Good Witch of alcohols, and methanol, the Wicked Witch which will blind you. Methanol boils at 148 F and ethanol boils a 173 F. What happens if we heat up this concoction now? What you’d observe is the temperature rising to 149 F and staying at that temperature for while a vapor comes off. That vapor is simply the methanol in gaseous form. As long as there’s methanol remaining in the solution, the temperature stays at 148 F.
Eventually all the methanol boils off and we notice the solution’s temperature starts rising again. It rises until 173 F and then again stops rising. At this point a different vapor, ethanol is coming off the liquid. As with methanol, the solution’s temperature stays steady till all the ethanol has been vaporized off. Once this happens we’re left with just plain old water.
While boiling fluids into steam might be fun to watch, it’s not ultimately productive. However, what if we wanted to collect just the ethanol, and have it in a liquid form? In that case, instead of boiling it the liquid into the open air, we can boil it in a semi-closed container with a tube attached, providing the vapor a place to escape to, like shown here: 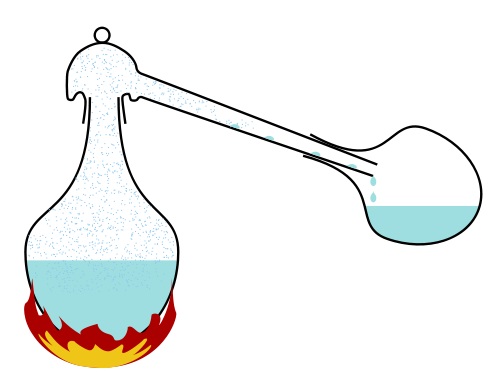 Being advanced thinkers, let’s chill the outside of this tube so that the vapor cools faster, perhaps bathing the tubing in some cool water. Were we to repeat the above boiling experiment with this closed container and a tube, the output from the tube would first be methanol liquid, then ethanol liquid, and eventually water. By selecting when we collect and when we don’t, we can end up with a much more pure solution than we started with. This is the essence of fractional distillation!
How do you know which liquid is coming out of the tubing? That’s easy! Look at the thermometer. Knowing the temperature of the liquid you can infer what’s boiling, and hence what’s coming out of the tube in cooled form. If all you want is ethanol, only collect the liquid that’s coming out when the thermometer reads 173 F. Watching this happen in real life in the seventh grade was one of those seminal moments where I knew my future lay in the sciences.
Of course, distillation is never quite so cut and dried. While the ethanol is boiling off, the occasional congener molecule (the flavor, you’ll recall) or water gets carried along in the rising ethanol vapor. As a result, the cooled liquid you collect has more ethanol than you started with, but also some amount of water and congeners. Of course you can redistill the resulting mix to further purify it. When a vodka advertises exactly how many times it’s distilled, this is exactly what they’re doing, removing impurities and congeners with each distillation run. On the other hand, congeners also contain the components that give each type of spirit its distinct taste – The congeners in tequila taste different than the congeners in rum which tastes different from whiskey’s congeners.
An interesting aside, using heat-based distillation, you can’t get above 95% purity of ethanol, no matter how many times you distill. It turns out that water molecules bond to ethanol molecules and more elaborate methods are needed to strip the water out if you needed a higher alcohol percentage. This is not coincidentally why Everclear is 95% alcohol, or 190 proof as we more commonly know it.

Distillation in the real world

The beauty of distillation is that it can be performed multiple times, each time further concentrating the desired elements and leaving out the undesirable. Much of the differences between brands of spirits come down to
Some spirits have legal requirements about the minimum or maximum alcohol content they must be distilled to. Note that this is not the same as the final alcohol percentage in in the bottle. Many spirits are distilled to much higher alcohol percentages, aged in barrels, and then water is added to bring the final bottled result down to more palatable alcohol levels, typically between 40% and 50%.
Consider pisco and brandy, both which originate from fermented grapes. Peruvian Pisco cannot be distilled to above the alcohol percentage that it’s ultimately bottled at, typically around 40%. In contrast, brandy is usually distilled to a much higher percentage, thus removing more congeners before adding water to bring the alcohol content back down. Thus, the pisco distillation process has fewer opportunities to remove undesirable congeners, contributing to its relative “roughness” compared to brandy. Much magic to smooth out a spirit can be performed during the barrel aging process, but that’s a topic for another post.
Another example:  Bourbon cannot legally be distilled to more than 80% alcohol, but before it’s put into barrels, it must be no more than 62.5% alcohol. Compare that to vodka which is typically distilled to 95% alcohol. It’s pretty easy to see that bourbon has many more congeners in it so has far more taste than vodka ever will.
And finally, consider Scotch whisky versus Irish whiskey. One of the primary differences between them is that scotch is typically distilled twice, whereas Irish whiskey is distilled three times. This additional distillation tends to make Irish whiskeys taste a bit lighter or cleaner than scotch – fewer congeners. Of course, what taste better is a matter of personal preference, but that’s the science behind the differences.
A huge part of the spirit-making craft is controlling the distillation process. Knowing when to start and stop collecting is just one part of the story. Every batch of starting mash is different and the distiller’s craft is to know how to adjust things to create an optimal distillate.

Already advanced cocktails wonks will note that I’ve not covered the various types of stills. While worthy of great amounts of wonkery, it’s not strictly necessary to understand the basics of distillation. Look forward to future posts on more advanced distillation topics.

2 thoughts on “Distillation for Dummies”