At the American Distilling Institute conference today (4/1/15), Bryan Davis of Lost Spirits Distillery is announcing they will be making their unique, patented, hyper-speed aging process available to other spirit makers – providing the equivalent of twenty years of barrel aging in a week. No, this isn’t barrel aging with microscopic barrels, and in fact there are no barrels used. The implications of this are profound for the spirits industry. It may sound like an alchemist’s dream of turning lead into gold, but Bryan has the science to back up the claim. A companion post to this story goes into the science of spirit flavors and how Lost Spirits backs up their claims, but for this post, it’s sufficient to know that barrel aging is about transforming organic compounds into more pleasant tasting organic compounds

Before jumping into exactly what Lost Spirits is planning, let’s first review what traditional barrel aging is about. Unlike what many people think, the goal of barrel aging isn’t just to impart a woody flavor to spirits. Instead, the wood both contributes organic compounds to the aging spirit and transforms already existing organic compounds into other organic compounds. Typically referred to as esters and aldehydes, these are what give distilled spirits their taste. (For instance, the ethyl butryate ester has the taste of pineapple, while phenethyl acetate has the taste of honey. When spirits emerge from the still, they’re a soup of mostly organic acids and a few esters, which the barrel aging transforms into other (hopefully flavorful) esters, and a lot more of them.

In an earlier post on this blog, I referenced a white paper on the Lost Spirits website showing gas chromatography charts for a 33-year aged demerara rum. In the simplest terms, the location of spikes on the chart’s X-axis shows the presence of specific flavor compounds, and the height of the spike indicates how much of that compound is present. The presence or absence of spikes, along with their relative heights, provides a “fingerprint” for the spirit. Spirits with similar gas chromatography fingerprints will taste very similar, because essentially they are made of the same stuff. 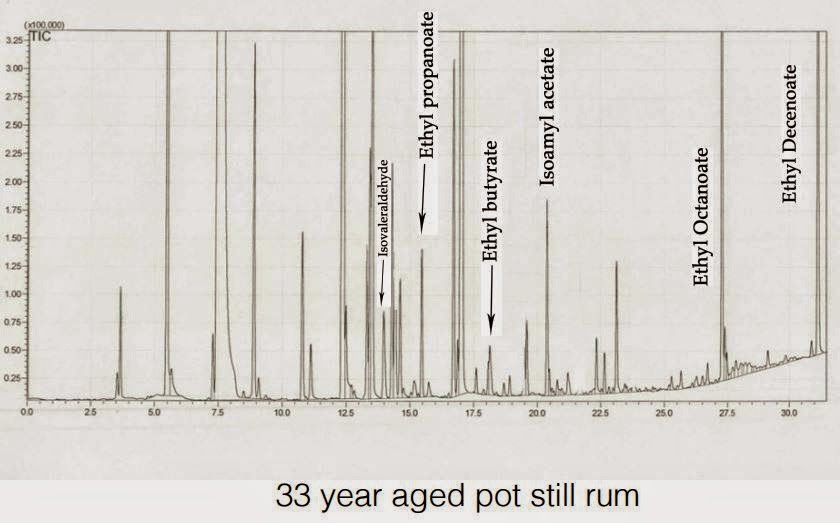 While the aforementioned paper is interesting in a wonky sort of way, it also set the stage for Bryan to demonstrate the effectiveness of his aging process. (We’ll get to the details of that shortly.) Bryan set out to replicate the signature of this 33-year aged demerara rum using his own distillate and a week-long aging process.The gas chromatograph for the Colonial Inspired Rum (below) shows a similar signature to the 33-year demerara, however its peaks are not as high. That is, the same esters are present, and at the same ratios, although in lower concentrations. Bryan says the Colonial Inspired rum contains about 60 percent of the peak ester and aldehyde levels of the 33-year demerara, corresponding to 20 or so years of aging, assuming the barrel’s ester transformation rate is linear. Put another way, if the 33-year rum had instead been pulled from the barrel after 20 years, it should have a similar profile to .  In short, Lost Spirits has turned twenty years of waiting into seven days.

While the Colonial Inspired rum was a limited edition, there’s more rum coming from Lost Spirits very soon. While the Colonial Inspired didn’t set out to exactly match the demerara style, the chromatograph strongly suggested it was possible. Thus, Bryan has set his sights on replicating the flavor profile of the 33 year aged demara, down to the touch of caramelized sugar that the graphs suggest is present. The result is the new Lost Spirits Prometheus rum, which will debut at Rum Renaissance in April 2015.

Although the exact details of every step of the Lost Spirits aging process remain a secret, here’s what I can share: Barrels are not used. Instead, charred blocks of wood go into tanks along with the unaged spirit. (Barrels themselves are charred, so charred wood blocks aren’t surprising.) Once the spirit and blocks are in the reactor, the following transformations occur (paraphrasing Bryan):

1) Forced esterification of the volatile carboxylic esters.
2) Polymers in the charred oak blocks are shredded, yielding the same proportionate precursor molecules as the barrel does naturally over decades of aging.

3) Forced the esterification of the wood-derived precursors, which ultimately form into a mix of long-and short-chained esters.

The effect of these three steps is to rapidly cause the same ester transformations that happen in a traditional barrel—but in a literal fraction of the time
The original Lost Spirits rums (Navy Style, Polynesian Inspired, Cuban Inspired) used an early version of this aging process wherein the rum was divided, and each portion went through just one of the steps before all the portions were blended back together. The newer version of the aging process (2.0) runs the entire batch through all three steps in a very specific sequence. The Lost Spirits Colonial Inspired rum, covered here, is the first release to use the 2.0 process. The Prometheus rum will be the second release, although with a different flavor profile, i.e., similar to a 20-year aged demerara.

Given all the crazy equipment and complicated steps necessary to pull off this unique, hyper-speed aging process, how will Lost Spirits lease this technology to other distillers while keeping the critical parts of it a trade secret? Would you believe a “reactor” that condenses the process into a large box, roughly the size of a compact SUV, that’s delivered to the leasing distillery and then wired up for electricity and internet? The power is necessary for the pumps, computers, and other devices within. The internet connection will connect the reactor to Lost Spirit’s computers for control and monitoring. If the reactor can’t talk to the Lost Spirits computer, everything shuts down.  And if you pry open the box to see what’s inside? Don’t even think about it.

With the reactor in play, different aging profiles can be created to emphasize desired characteristics. An on-site iPad will provide a certain degree of control to the local distiller. There will be some level of access to the reactor internals – after all, the wood blocks will need to be changed out. But beyond a few things like that, the distiller adds his unaged spirit, and in a week or so, collects the transformed spirit, ready for bottling.

As for how the leasing works, at least in the beta phase, distilleries will pay an upfront amount to cover equipment costs and then a monthly fee thereafter. While this is obviously an added expense for small distillers, barrel aging is expensive as well. Distillers have their capital tied up in barrels for several years, sometimes decades, and during that time they’re losing product to the angel’s share (spirit that evaporates through the barrel walls). Initially Bryan plans to take just a handful of carefully selected distilleries into his beta process, enabling him to closely monitor the process and make adjustments as necessary. He expects that it will be several months before the first reactor is delivered, making a mid-2015 debut.

I have to admit, from the first moment Bryan told me about this (under NDA) I’ve been filled with, “What about…?” and “What if…?” questions. It’s without a doubt a bold move, filled with risk–not least of which is garnering unfavorable attention from giant spirits entities with a vested interest in the status quo. However, if Lost Spirits is successful in this venture, it opens the possibility of distillers creating higher quality products at price points far less than they could achieve with traditional barrel aging. I really can’t wait to see how this story plays out.

Update: Bryan has published his white paper on the reactor, named the “Model 1” on the Lost Spirits site.